The nominal capacitance value (CO) is established by a measurement performed at 1 MHz. In typical RF applications, the applied frequency is generally much higher than the 1 MHz measurement frequency, hence at these frequencies, the inductive reactance (XL) associated with the parasitic series inductance (LS) becomes significantly large as compared to the capacitive reactance (XC). Figure 2 illustrates that there is a disproportionate increase in XL as compared to XC with increasing frequencies. This results in an effective capacitance that is greater than the nominal capacitance. Finally, at the capacitor’s series resonant frequency, the two reactances are equal and opposite, yielding a net reactance of zero. The expression for CE becomes undefined at this frequency.

As illustrated in Figure 1, the physical capacitor can be represented as CO in series with LS. The impedance of the series combination of CO and LS can then be set equal to CE, which may be referred to as an “ideal equivalent” capacitor. This will yield the following equation:

The relationship between the operating frequency F0 and the effective capacitance CE can then be stated as:

From this relationship, it can be seen that as the applied frequency increases, the denominator becomes smaller, thereby yielding a larger effective capacitance. At the capacitor’s series resonant frequency, the denominator goes to zero and the expression becomes undefined. The relationship of CE vs frequency is a hyperbolic function as illustrated in Figure 3. 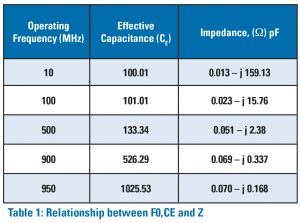