April 20, 2016 —Mouser Electronics, Inc., a leading global authorized distributor of the newest electronic components, today announced the launch of a new series in the second year of the Empowering Innovation Together™ program with former Mythbusters star and longtime Mouser customer, Grant Imahara. The new program will also see the debut of the Mouser Innovation Lab™, where Imahara and special guests will build several cutting-edge projects powered by the newest products and technologies from Mouser’s manufacturer partners. 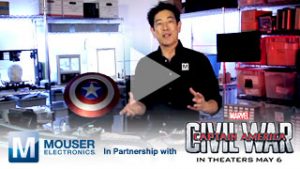 Grant Imahara will team up with viral video celebrity Allen Pan in a series of videos to highlight the full build process — from concept to the final unveiling. This first project is sponsored by Molex and Analog Devices, who will supply new, advanced parts for the challenging build.

“With Mouser combining engineering and Marvel’s characters into an entertaining and easy to understand STEM-oriented video segment, it will help students and others gain new insights into the technology field,” stated Mindy Hamilton, Senior Vice President of Global Partnerships at Marvel Entertainment LLC. “We enjoy working with any partner that helps to highlight the benefits that STEM brings to young minds.”

“I’m really excited to get into the new Mouser Innovation Lab and start working on these cool devices from the Marvel Cinematic Universe,” said Imahara. “I’ve seen several of Allen’s project videos. I can’t wait to see what we can come up with in the lab.”

“The goal of the Empowering Innovation Together program is to inspire and engage engineers of all ages — from students to millennials to lead engineers,” stated Glenn Smith, President and CEO of Mouser Electronics. “During the year we’ll be exploring space tech, pushing the boundaries of drone capabilities and even 3D printing a car.”

Mouser Electronics, a subsidiary of TTI, Inc., is part of Warren Buffett’s Berkshire Hathaway family of companies. Mouser is an award-winning authorized semiconductor and electronic component distributor, focused on the rapid introduction of new products and technologies to electronic design engineers and buyers. Mouser.com features more than four million products online from more than 500 manufacturers. Mouser publishes multiple catalogs per year providing designers with up-to-date data on the components now available for the next generation of electronic devices. Mouser ships globally to over 500,000 customers in 170 countries from its 492,000 sq. ft. state-of-the-art facility south of Dallas, Texas. For more information, visit www.mouser.com.

Marvel’s “Captain America: Civil War” finds Steve Rogers leading the newly formed team of Avengers in their continued efforts to safeguard humanity. But after another incident involving the Avengers results in collateral damage, political pressure mounts to install a system of accountability, headed by a governing body to oversee and direct the team. The new status quo fractures the Avengers, resulting in two camps—one led by Steve Rogers and his desire for the Avengers to remain free to defend humanity without government interference, and the other following Tony Stark’s surprising decision to support government oversight and accountability.

Anthony & Joe Russo are directing with Kevin Feige producing. Louis D’Esposito, Victoria Alonso, Patricia Whitcher, Nate Moore and Stan Lee are the executive producers. The screenplay is by Christopher Markus & Stephen McFeely. Get ready to pick a side and join the nonstop action playing out on two fronts when Marvel’s “Captain America: Civil War” opens in U.S. theaters on May 6, 2016.

Marvel Entertainment, LLC, a wholly-owned subsidiary of The Walt Disney Company, is one of the world’s most prominent character-based entertainment companies, built on a proven library of more than 8,000 characters featured in a variety of media over seventy-five years. Marvel utilizes its character franchises in entertainment, licensing and publishing. For more information visit marvel.com. © 2016 MARVEL 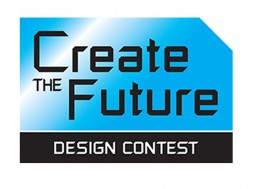