Solder joint reliability prediction continues to be a critical aspect of a reliability assessment of microelectronic packages and electronic hardware and systems in general.  Solder joint failure due to temperature cycling induced creep is considered the dominant failure mechanism in a “Central Office” environment.  Coefficient of thermal expansion (CTE) mismatch between the package and printed circuit board (PCB), combined with temperature excursions due to assembly processing and daily ambient temperature cycling, result in solder joint stress, plastic strain and creep that cause cracking and ultimately the failure of the package to PCB solder interconnect.

For SnPb solders, there is a significant amount of industry data based on a relatively mature and broad range of electronic applications. This has supported the development of robust, empirically derived constitutive material models, failure prediction models, and acceleration factors that can predict solder joint life and allow for confidence in modeling and design. In the case of lead-free materials compliant with the Restriction of Hazardous Substances Directive, (RoHS), the general failure mechanism remains the same, however, sensitivities to stresses are different from those of lead containing solders. While constitutive material, failure prediction and acceleration models exist for lead-free solders, they are less mature and more work is required to build confidence in these models.

An additional complication to solder joint reliability analysis is the definition of product life requirements. Typically defined as a small fraction of unit failures under field conditions, predictions of this nature require assumptions or test data of failure rates/distributions to arrive at predictions for a small fraction of failures. Finally, translating model and test data to field use conditions requires acceleration factors that are empirically derived and material specific. Absolute mean life predictions have limited accuracy, [1], [2], and these compounding factors introduce additional uncertainty in a long term prediction.

In this study, relative and absolute SJR life predictions were made for a high performance RF microelectronic package. Empirical studies were also performed to further assess reliability and validate SJR predictions.

The package considered in this study is a ceramic, “cavity down” package with a top-side heat spreader, bottom-side perimeter ball array and large central ground pad/lid. Figures 1, 2a, and 2b show package size, configuration and overall dimensions.

Given the difference in the CTE of the ceramic substrate and the application defined PCB, (ΔCTEPCB-Substrate = 7.5ppm/°C), BGA balls in this configuration span a relatively large CTE mismatch compared with organic packages.

Solder balls of different sizes were considered as a design tradeoff between package solder joint reliability and RF performance; larger spheres are preferred for reliability while smaller spheres are preferred for performance. With respect to solder material, SAC305 was chosen based on 2nd level assembly requirements, therefore alternate SAC formulations were not considered.

A half-symmetry model of the package was created and simulations were run using ANSYS Static Structural FEA software. Collapsed BGA ball shapes were estimated using The Surface Evolver, an application for modeling liquid surfaces, [3]. Ball shapes were influenced by selections of initial ball diameter, pad diameter and stand-off height. Pad locations, and hence BGA pitch, were not varied for different ball configurations. A summary of the geometries considered is presented in Table 1, and a visual comparison of these geometries is shown in Figure 3.

To understand the impact of certain shape variables, additional shapes were considered by scaling the collapsed 0.6mm ball shape. Balls 2 and 5 described in Table 1 are scaled versions of Ball 1.

Package materials and the system level PCB material properties (CTE, Young’s modulus and Poisson’s ratio) were estimated and a constitutive model in the form of a double power law was used for the SAC305 BGA balls based on work by Wiese, Meusel and Wolter [4].

The general life prediction approach used in this study is based on empirical correlations between simulation data and test data, performed by Syed, [2] and [5], with both accumulated creep strain and creep energy density used as failure metrics. A detailed/fine mesh was applied to the area of the critical solder joint, the ball farthest from the package center. Both failure metrics were volume averaged over a 25 micron thick slice of the critical solder balls at the package and board interfaces. As per [5], a minimum of two elements were modeled across the thickness of the critical ball slices. An example meshed ball geometry is shown in Figure 4.

Simulations assumed the solder reflow temperature as the stress-free temperature of the package-PCB assembly. A thermal load simulated an accelerated thermal cycle so as to correlate with SJR testing and failure models presented by [5]. A cycle from 0°C to 100°C with 15min ramp rates and 15min dwells was used. Simulations were run for three complete thermal cycles and damage metrics were taken as the accumulated metric over the complete third thermal cycle.

Simulations predict Ball 1, the largest ball with the highest stand-off height, to be the most reliable configuration; however, less than a 10% difference is predicted in mean life across all configurations.

As an isolated variable, stand-off height is predicted to have a non-linear relationship with reliability; Figure 6 shows the  relative reliability of similar shape balls, (proportionally scaled), plotted with respect to stand-off height.

In considering package design with respect to the product’s reliability requirements, modeling results were used to arrive at an absolute life prediction for the failure of 100ppm units in use in field conditions.

To arrive at an absolute life prediction for field-use conditions, a literature review was performed to determine an appropriate acceleration factor for SAC305 solder. Many empirically derived models have been presented in recent years and eight models were considered in this study, [6]–[11], providing a wide range of life estimates. The selection of an acceleration factor, however, is not discussed in this paper.

Given the nature of the product’s reliability requirements and the uncertainty surrounding lead-free solder joint life predictions, validation testing was performed on packages with a “Ball 1” configuration. A set of 32 daisy chained package assemblies were mounted to PCBs and temperature cycled in a single cavity chamber using the same regime simulated in life prediction modeling: 0°C to 100°C with 15min ramp rates and 15min dwells. The test PCB was designed to match dimensional and material properties of the PCB used in simulations and the product application (board thickness, stack up, material set, pad size, etc.). An event detector monitored in-situ resistance of all BGA balls connected in 4 discrete nets per package. The detector event threshold set at 300Ω and a unit was considered failed as per the recommended failure criteria laid out in [12].

At the end of testing, 29 of the 32 test packages had experienced solder joint failure. Several units were cross-sectioned through the BGA and imaged using scanning electron microscopy, (SEM). BGA geometry was validated, and as predicted, solder joint failures occurred at the package interface to the BGA ball, as seen in Figure 7.

The failure data was fit to both 2-p and 3-p Weibull distributions. Figures 8a and 8b show plots of SJR test data fitted with probability density function, (PDF), and cumulative distribution functions, (CDF), respectively.

Looking qualitatively at the plots, the 2-p distribution has a long leading tail that affects the life prediction of a small fraction of failures significantly. Given the relatively low R-squared value and leading tail, this 2-p distribution may provide an overly conservative estimate of 100ppm life. Conversely, the 3-p distribution fits the data very well, and while the large shift presumes a significant failure-free life and provides a less conservative prediction of 100ppm life, the “goodness-of-fit” of the 3-p distribution with test data warrants some consideration  of failure-free life.

A comparison of fitted test data with simulated mean life estimates obtained from “Ball 1” modeling is presented in Table IV.

Data fit with “typical” 3-p Weibull parameters used the assumption that the shift parameter equaled half of the scale parameter and as such, the entire distribution is shifted toward a lower life prediction. In this particular case, the assumption appears to be overly conservative.

Most notable is that the 100ppm life predictions calculated using these distributions differ by as much as 5x. This highlights the importance of selecting an appropriate failure distribution when making predictions at small fractions of failures.

An overview of the solder joint reliability assessment methodology for a custom design lead-free, high performance RF package has been presented, including:

• test data to estimate a failure distribution and 100ppm life

• an acceleration factor to estimate life under field-use conditions

This reliability assessment was required to demonstrate compliance with product reliability specifications.

The selection of an appropriate failure distribution was shown to be a critical element in making reasonable life predictions as it has a significant impact on estimates, especially when considering a small fraction of unit failures, (100pmm).  Test data fit best to a 3 parameter Weibull distribution with a shift parameter representing failure-free life. The 3-p distribution precipitates a much less conservative 100ppm life prediction compared to a 2 parameter distribution. In this study, the assumption of a 3-p distribution with a significant failure-free life seems valid given test data, but the topic warrants further investigation through additional empirical studies with larger sample sizes.

Acceleration factors were not explicitly discussed, however, several published models were considered in the analysis, [6]-[11], providing a range of acceleration factors that differed by as much as 4x for “Central Office” conditions.

Ultimately, the assessment demonstrated the product solder joint reliability had sufficient margin to meet the required reliability specification. Additional modeling and validation tests on varying packages and solder joint configurations are required to further refine the selection of an appropriate failure distribution and acceleration factor. For more information about Sanmina scan the QR or go to: http://bit.ly/1TLTkDI 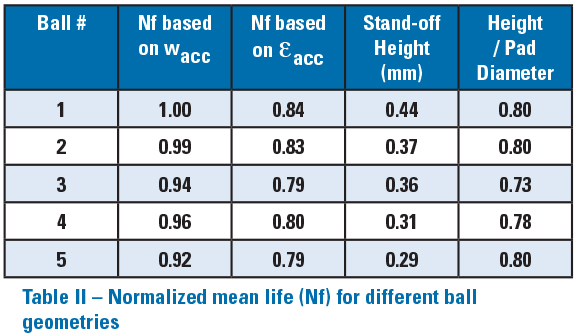 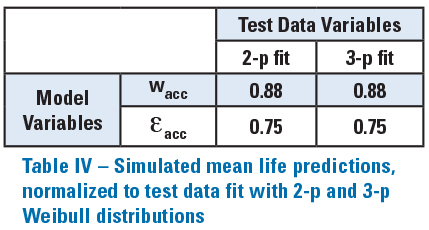 The authors would like to acknowledge and thank Mike Newhouse of Sanmina and Denis Cousineau of the University of Ottawa for their comments.

[5] A. Syed, “Updated life prediction models for solder joints with removal of modeling assumptions and effect of constitutive equations,” Thermal, Mechanical and Multiphysics Simulations and Experiments in Micro-Electronics and Micro-Systems Conf. April 2006, pp. 1-9.