In the USA, spectrum has been made available for a nationwide LTE-based public safety network. The First Responder Network Authority (FirstNet) plans to deploy, maintain and service this LTE band 14 public safety network for first responders such as police, firefighters and emergency medical personnel. 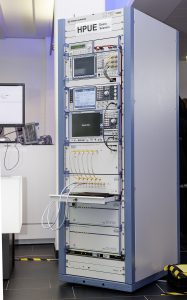 PTCRB issued a request for test (RFT 118) for higher output power test cases at +31 dBm to verify transmitter performance of user equipment intended for operation in LTE FDD band 14. The high output power helps to extend coverage since commercial LTE devices can only transmit at a maximum power of +23 dBm.

Rohde & Schwarz has validated six RF conformance test cases for LTE-capable high-power user equipment (HPUE), allowing the certification of such devices to start. The R&S TS8980 test system is the first and so far only test system that covers these tests for LTE band 14 public safety networks. With this accomplishment, Rohde & Schwarz is paving the way for LTE’s expansion into critical communication applications.

At the recent PVG #73 meeting in Munich, Rohde & Schwarz validated all six test cases in RFT 118, becoming the first provider of test equipment for the now active HPUE certification requirement.

To validate the test cases, the R&S TS8980 RF conformance test system from Rohde & Schwarz emulates an LTE band 14 network in which the LTE-capable HPUE can register. The test system then runs through all required transmitter tests to verify user equipment performance at the high output power of +31 dBm. The test cases also prove that these devices do not interfere with any commercial LTE networks that are using frequencies adjacent to band 14.