92
0
Share
92
0   0
Award presented at DAIHEN’s annual supplier meeting at its Rokko business office
in Kobe, Japan
Richardson RFPD, Inc. announced today that it has received an award from DAIHEN Corporation, a company based in Osaka, Japan that specializes in the manufacturing, sales and service of electric power transmission and distribution products, dispersed power system, welding machines, industrial robots and power supply for plasma applications, and clean transfer robots used in the manufacture of semiconductor, LCD and solar panel.
The award was presented in May, 2016 at DAIHEN’s annual supplier meeting. Richardson RFPD’s award marks the first time DAIHEN has given an award to a distributor.
According to DAIHEN, the award was presented to Richardson RFPD because of its contribution to the development of a next-generation plasma generator, including extensive efforts to secure just-in-time delivery, as well as key negotiations with the supplier to achieve cost reductions.
“Richardson RFPD strives to perform at the highest service level and engage with strategic vendors to ensure our customers’ satisfaction,” said Rafael R. Salmi, Ph.D., Richardson RFPD’s president. “We must emphasize the support of our suppliers as a vital component in solidifying this successful customer relationship. For a key customer such as DAIHEN to recognize us and, in turn, our suppliers, for this effort is truly an honor.”
“We look forward to continued success with Richardson RFPD and their tremendous teamwork and commitment to QCDD—quality, cost, delivery and R&D tech support,” said Yuji Yoshizako, Ph.D., DAIHEN’s executive general manager. “We appreciate Richardson RFPD’s continued hard work and support that enables the growth of both of our companies.”
About Richardson RFPD
Richardson RFPD, an Arrow Electronics company, is a global leader in the RF and wireless communications, power conversion and renewable energy markets. It brings relationships with many of the industry’s top radio frequency and power component suppliers. Whether it’s designing components or engineering complete solutions, Richardson RFPD’s worldwide design centers and technical sales team provide comprehensive support for customers’ go-to-market strategy, from prototype to production. More information is available online at www.richardsonrfpd.com. 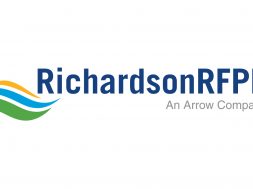