$71.5 Billion Worth of Opportunities for Electronic Test and Measurement

In 2017, the electronic test and measurement (T&M) market encompassing semiconductor automatic test equipment (ATE), radio frequency (RF) and microwave (MW) test equipment, digital test equipment, field testers, and data acquisition (DAQ) generated over $10.83 billion in revenue. The market registered high single digit growth, the result of a high growth in semiconductor ATE and digital test, medium growth in DAQ and field testers, and low single-digit growth in RF test. But don’t let this fool you: RF test represents the largest revenue opportunity for electronic T&M for the next 5 years. It is expected to generate a whopping $18.78 billion from 2017 to 2022.

Consisting of one-box testers, spectrum and signal analyzers, signal generators, and context RF instruments such as power meters and electronic counters, the RF test market will benefit tremendously from the development of cellular and Wi-Fi technologies, most notably 5G, autonomous driving and the connected car, as well as Internet of Things (IoT) standards.

In the short term, the growth of the RF test market will be driven by core RF instruments, which are used extensively in R&D. In the longer term, these technologies will move down the product lifecycle and generate demand for one-box testers and then portable instruments for network deployment applications.

Finally, field testers are getting a boost from IoT. With customers’ major concerns remaining the safety of their personnel and increasing productivity, connected devices are helping renew the installed base. Market growth also gets a boost from environmental concerns and the need to comply with regulations. 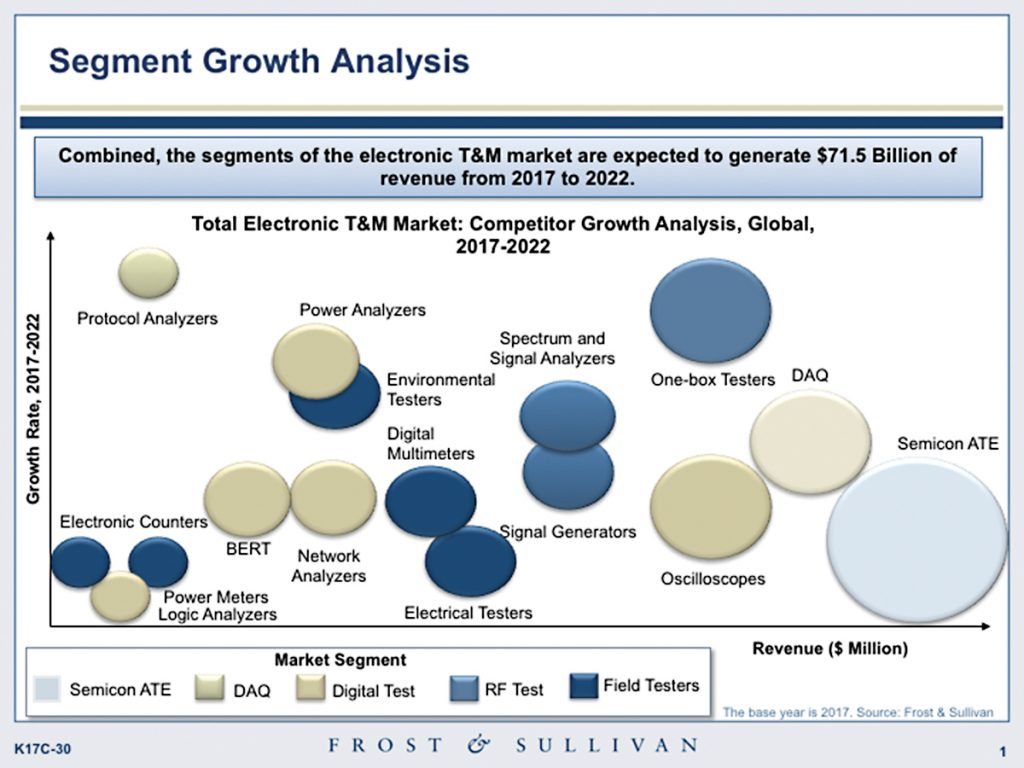 In It to Win It

The future for electronic T&M looks bright but won’t be without counter-pressures, including intense price pressure and the transition from hardware to software. New technologies require upgraded specifications in RF instrumentation to address higher frequencies and wider bandwidth requirements and drive up the price of such instruments. Also, most companies in the electronic T&M industry rely heavily on hardware revenue and are struggling to transform their organizations.

From a competitive perspective, no company holds significant presence across all the segments of the electronic T&M market. This provides room for mergers and acquisitions and strategic partnerships.

Over the next 5 years, RF test market participants are the most likely to grow the fastest. This includes Keysight Technologies, Rohde & Schwarz, Anritsu, Cobham, National Instruments, and LitePoint. However, new disruptive technology creates the opportunity for challengers to displace incumbents. Frost & Sullivan expects shuffling at the top of the leaderboard in RF test as these companies look to cash in on the efforts they have put in in 5G R&D work with industry leaders for as long as the past 5 years.

In semiconductor ATE, the market is highly consolidated in the hands of Teradyne, Advantest, and LTX-Credence. Despite inroads being made by modular instrumentation into the space, current penetration is too low to show at the overall market level. In contrast, the DAQ market is fragmented and provides opportunities for mergers and acquisitions. With technology evolution and convergence driving demand for single systems with broad sensor and signal coverage, market winners will be those able to address this demand while addressing the specific requirements of applications.

In field testers, demand is growing for connected devices. Demand for more functions from a given tool is also driving convergence. With the digital multimeter as the go-to tool for technicians, companies strong in this product segment are best positioned to capture the revenue opportunity, provided they have expertise in the functions customers are most interested in.

Between 2017 and 2022, the electronic T&M segment is expected to grow, largely due to innovation occurring in mobile communications, semiconductors, and automotive industries; the support from aerospace and defence customers; and emerging demand from medical devices. A global market, electronic T&M equipment provides opportunities to companies across regions, especially in Asia Pacific, North America, and Europe. Global hotspots include the U.S. in North America; UK, France and Germany in Europe; and China, Japan, Taiwan, South Korea, and India in Asia. The market revenues are expected to reach $13.18 billion in 2022, at a compound annual growth rate of 4%.