A new ruggedized enclosure on the market may be just the solution defense customers have been looking for all along.

Not only is it lightweight and compact —fitting the 950mp like a glove—it’s also dust- and water-resistant, making it ideal to operate in either desert or monsoon-like conditions.

Before its release, the 9050 OM underwent rigorous rounds of MIL-STD 810G compliance testing to ensure that it remains operational even in the direst of conditions.

Test engineers heated the unit to 140 degrees Fahrenheit (60 degrees Celsius) before submerging it in 36 inches (91.45 centimeters) of water, which caused the unit’s temperature to drop drastically.

“What that does is show that, in scenarios like that, there’s potential for water to be sucked in because there’s a rapid change in temperature,” iDirectGov Senior Vice President of Technology Karl Fuchs explained. “But in this case, after 30 minutes, it was taken out, and there was no evidence of water penetration into the unit, and it was able to power up without any incident or problems, working just as we designed it to.”

“Let’s say you’re in the desert in the middle of a dust storm, or you’re in a monsoon in the rainforest,” Fuchs described, “the unit will operate while it’s powered on with no problems.”

Although in those types of conditions, teams don’t turn on satellite systems, Fuchs added.

“It just shows you the worst case that it can operate in those conditions.”

Because satellite communication systems operate outdoors, iDirectGov saw the need to develop an enclosure unit that would allow customers the freedom to work without worrying about the weather conditions or carrying large, heavy transit cases to protect their equipment from the elements.

“We have to make sure our man-portable equipment can be kicked out of a plane at 25,000 feet and survive,” Fuchs said.

“We have guys that will jump out of planes, and the satellite systems get packed up into what they call ‘door bundles.’ They literally kick them out of the airplane, the parachute opens up, and the bundle hits the ground quite violently in regards to the system,” Fuchs explained. “(That equipment) needs to be able to operate in that kind of environment.”

Taking the “less is more” approach, iDirectGov has developed a solution that allows the operator to use only an antenna and modem-—without the need for transit cases—and be connected in minutes.

“(Transit cases) have a lot of weight to deal with, and it’s a lot of gear,” Fuchs said. “With the 9050 OM, it helps minimize that amount of gear to where (an integrated satellite router board) can operate in outdoor environments. It’s designed to be completely enclosed, protected from the elements, and to take it a step further, it can basically be beaten up and abused but yet still be operational.”

Although the big selling point of the 9050 OM is its ability to withstand the elements, product engineers did not skimp on its transmission security (TRANSEC) features.

Like the 950mp integrated satellite router board it protects, the 9050 OM is FIPS 140-2 Level 3 certified, WGS certification ready and boasts upgraded TRANSEC features, which include being able to detect and respond to attempts at physical access or modifications made to the cryptographic module. This takes the security level up a notch from Level 2, which only requires a tamper-evident coating or seals to be placed on products that must be broken to gain access to cryptographic keys and critical security parameters.

With a more secure FIPS certification comes an even more secure TRANSEC. Not only does the 9050 OM—like the rest of their 9-Series product line—support two-way TRANSEC, it now supports one-way TRANSEC as well. Now, secure broadcast communications can be sent to receive-only terminals, helping to protect against man-in-the-middle attacks.

As a security measure, iDirectGov product engineers added a zeroize button to the 9050 OM, which erases all security keys from the TRANSEC module, guaranteeing the adversary does not gain access to the network. Product engineers also included a LED blackout switch for nighttime missions, plus an antenna pointing meter to provide a visual indication of a receive signal from the satellite above.

Compared to similar products on the market, iDirectGov’s 9050 OM is lighter and consumes less than 20 watts of power to operate, Fuchs said, a considerable amount less than its competitors.

Plus, iDirectGov’s platform is more widely used in the defense marketplace compared to others.

The 9050 OM is powered by Evolution 4.2 software. Its network topology has DVB-S2 with Adaptive TDMA Returns, and it boasts maximum rates of 45 Msps downstream and 29 Msps upstream.

For more information on the 9050 OM, visit the iDirectGov website.

Tony Tran is the Senior Manager of Product Management at iDirect Government. 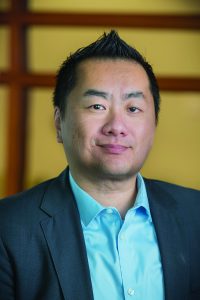 He brings more than 15 years of experience in both satellite and terrestrial communications. Over the span of his career, he has worked closely with various commercial, government and military organizations to achieve their telecommunication goals while meeting their mission requirements—all performed both domestic and abroad. He now applies his experience to develop the next leading edge satellite communication systems with a recognized leader in the satellite industry, iDirect Government. Tony holds a Masters in the Management of Secure Information Systems from George Mason University and enjoys volunteering his time to help students in school. Whether it involves special needs children in elementary school or graduate students in college, he is always willing to make the time to help them succeed.