The Internet of Things (IoT) has brought changes to many industries, but it has perhaps had the largest impact on the automotive industry. When General Motors first introduced OnStar on its vehicles in 1996, it marked the birth of the “connected car.” In the 20+ years since then, cars have continued to become smarter and more connected to the world around them. According to a report published by PwC, the global connected car market will reach a value of $123 billion by 2020. This is massive growth considering that it was only a $34 billion industry in 2015.1 While there are opportunities across the globe in this industry, the United States has proven to be the top nation in terms of revenue thus far (projected to be at 11,044 million in 2018).2

This industry is still very much in its infancy. Many automotive manufacturers, OEMs, and tech startups have spent decades focusing on connected car R&D. Now, these technologies are increasingly being designed into consumer products. Even though the global connected car market penetration is only at 8.0% in 2018, it is expected to reach 19.3% by 2021.3  By 2020, a projected quarter of a billion connected cars will be on the road.4

Importance of the Connected Car

In addition to better safety technology, connected cars are also making improvements in infotainment systems. As of 2018, these features of the connected car industry had yet to gain the widespread user adoption that many experts speculated they would a few years ago. Even with advances in voice command systems that connect drivers to entertainment options (i.e. Apple’s Siri or Amazon’s Alexa), drivers in 2018 still have to pay close attention to the road when driving. Many experts project that the rise of safe autonomous vehicles will create a much higher demand for in-car entertainment options in the near future. This industry’s growth opportunities are not limited to just software and media companies. The global in-car entertainment hardware market is expected to reach a value of $36 billion by 2021, compared to $20 billion in 2016.5 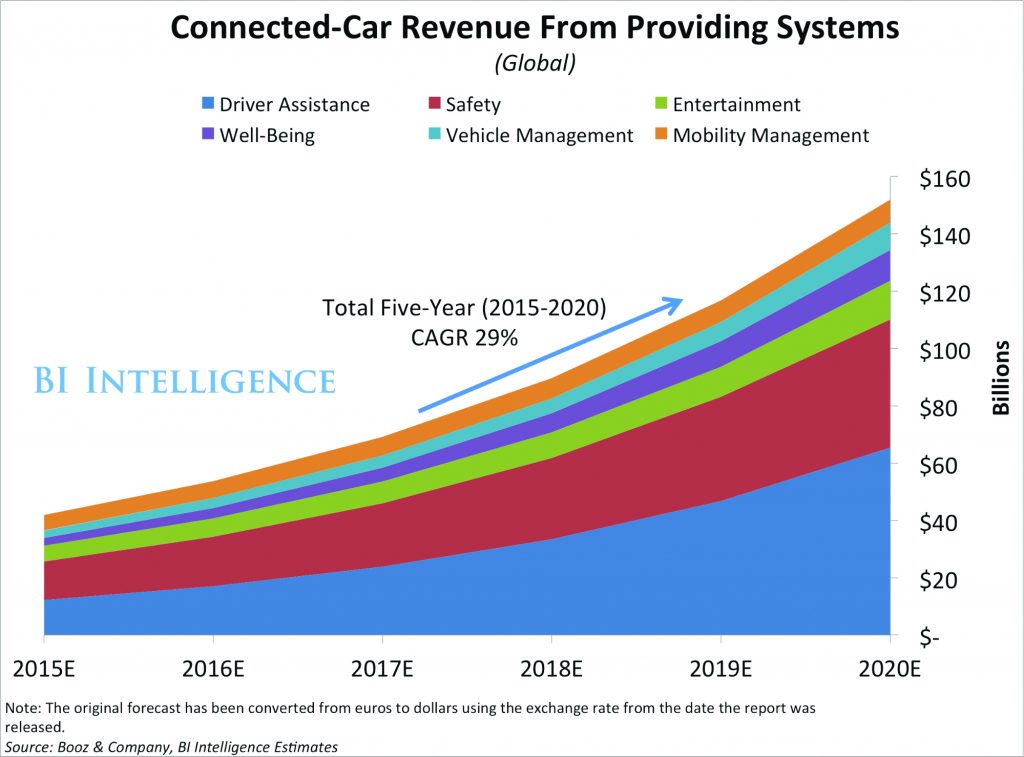 Connected cars have a track record of making the roads safer for drivers. For example, a 2013 study by the Insurance Institute for Highway Safety showed that automatic braking systems reduced rear-end crashes by around 40 percent. Forward collision warning technology reduced accidents by 23 percent.6 Advanced braking systems are not the only reason why cars are becoming safer through technology.

There are many different types of advanced driver assistance systems (ADAS) that are being utilized in both driver-operated and autonomous vehicles. While the implementation of fully autonomous vehicles for consumers is still a few years from becoming a reality (as of 2018), various forms of ADAS are being implemented in many popular cars that are already on the road. Furthermore, automotive manufacturers are committed to implementing additional ADAS technology into consumer vehicles in the near future. Twenty automakers, representing 99% of the U.S. auto market, have already pledged to make automatic emergency braking (AEB) a standard feature in vehicles by 2020.7 The overall ADAS market reached a value of 6 billion USD in 2016 and will grow to 10 billion USD by 2022.8

LiDAR, another very popular autonomous vehicle technology, is also improving the safety of driving. In basic terms, LiDAR helps cars avoid collisions and improve overall safety by using lasers to detect the position and distance of surrounding objects. This technology continues to see significant technological improvements. In 2017, Velodyne successfully built a device called VLS-128, which is only one-fifth the size of its previous generation high-resolution sensor. This new device can “see” further and in more detail than any LiDAR sensor currently available for purchase.9 As LiDAR technology becomes more cost-effective for manufacturers to produce, it will become an increasingly popular function on the next generation of consumer vehicles.

What Exactly is V2X, and Why is it Important?

Vehicle-to-X (V2X) uses dedicated short range communications (DSRC) to turn mobile devices and fixed nodes into a mesh network in which data can be shared. V2X works to create an interconnected network for vehicles and infrastructure systems. In turn, this will improve the future of transportation. With advances in V2X, the quality of ADAS/driver safety technologies will continue to improve. 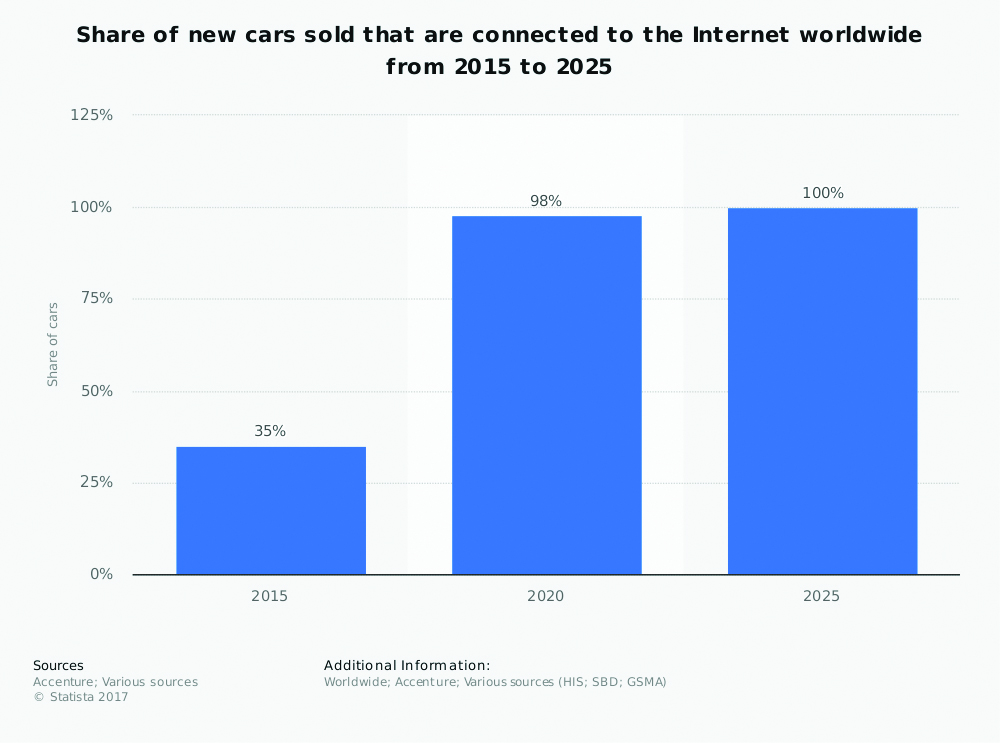 According to the the U.S. Department of Transportation, V2X helps “significantly reduce many of the most deadly types of crashes through real time advisories alerting drivers to imminent hazards–such as veering close to the edge of the road; vehicles suddenly stopped ahead; collision paths during merging; the presence of nearby communications devices and vehicles; sharp curves or slippery patches of roadway ahead.”11

Components of the Connected Car

A lot of the current connected car projects that consumers are familiar with focus primarily on software. For instance, there are mobile apps that help drivers to find better gas prices nearby, improve fuel economy, and even call for emergency assistance in the event of an accident. While software is an important part of the future of connected cars, hardware is an equally vital and highly profitable segment of this industry.

Amphenol RF provides the most comprehensive solutions for the connected car hardware market. These automotive solutions extend across engine management and control; exhaust monitoring and cleaning; infotainment and communications; in-car power, lighting, safety and security systems; navigation and telematics systems. Amphenol RF not only focuses on solutions relevant to the current connected car market but also develops products  that will be an integral part of future automotive technologies.

FAKRA is short for “Fachkreis Automobil.” FAKRA was originally established in Germany as a way to standardize interfaces for coaxial interconnections in automobile applications. It has since become adopted as a global standard. FAKRA and other industry standards like USCAR have helped to reduce the costs of making and implementing RF (Radio Frequency) interconnection by optimizing electrical and mechanical performance in telematics applications. 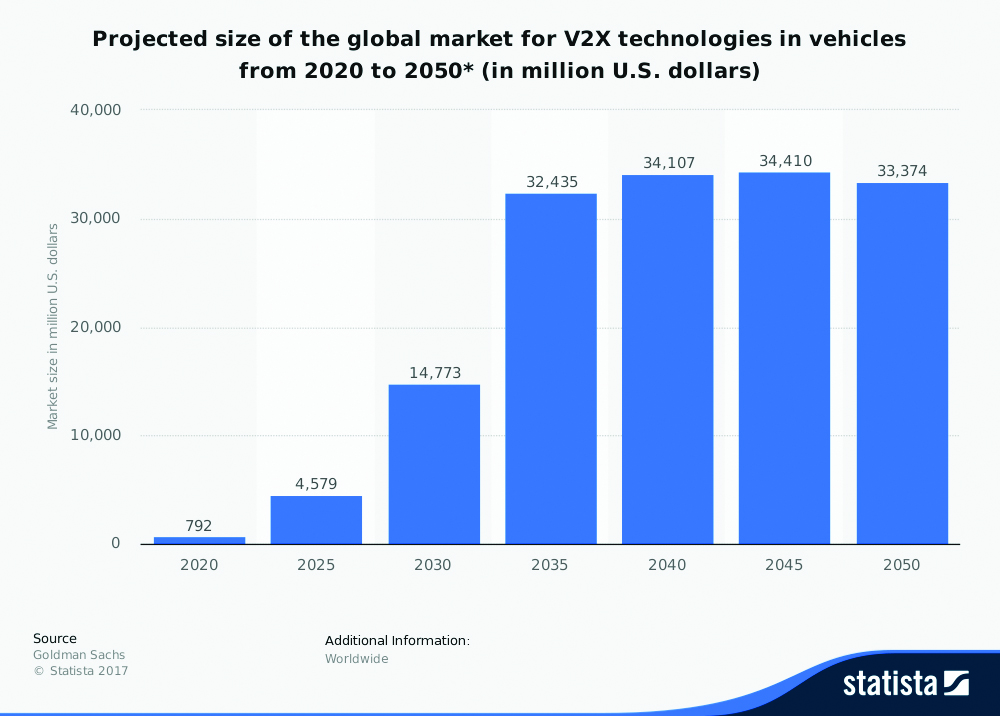 Gen 4.0 of Amphenol RF’s FAKRA connector series will be an integral part of the movement toward autonomous, self-driving vehicles. They can be used in important V2X applications like blind spot monitoring, emergency vehicle warning systems, and autonomous braking. This generation of products is also an upgrade over previous generations because it is specifically intended for high volume users with factories that utilize high-speed automated cable assembly production.

6.0 GHz FAKRA connectors are required for Dedicated Short Range Communications (DSRC) and V2X applications. For example, these connectors can be used for V2V and V2I applications like real-time alerts and updates that quickly inform drivers of potential hazards on the roadway. 6.0 GHz FAKRA connectors are integral components of systems that help prevent crashes and collisions. They can also be used for V2I services like e-parking and toll payments, which utilize DSRC.

Sealed FAKRA (IP67 rated) are essential for future connected car technologies, especially for those placed around the exterior of vehicle. For example, Sealed FAKRA connectors can easily be integrated into camera housings located within side view mirrors.

Amphenol RF’s Sealed FAKRA are tested to GMW3191 standards and are USCAR compatible. These products utilize both internal and external o-rings as well as adhesive heat shrink tubing in order to prevent dust and water ingress.

Amphenol RF’s line of Sealed FAKRA products are important because they protect parts of the connected car that would otherwise be susceptible to damage caused by temporary submergence or other harsh environmental factors.

Amphenol RF’s HSD (High Speed Data) cable mount connectors are available as plugs and jacks, offering the possibility of a single solution that works across many digital transmission standards. These connectors play a vital role in providing data transmission for current and future in-car entertainment technologies. For instance, they can be used in infotainment modules, headend units, and consumer ports.

Amphenol RF’s HSD product line can be used in combination with a variety of protocols such as LVDS (Low Voltage Differential Signaling), GVIF (Gigabit Video Interface), USB, IEEE 1394 as well as Ethernet protocols.

The connected car industry continues to offer new technological advancements which bring better entertainment and safety capabilities to consumers. As this market continues to develop, Amphenol RF is a company dedicated to manufacturing the highest quality connected hardware products on the market, providing businesses in the automotive industry with the components needed to build the connected cars of the future.

1. “In the Fast Lane.” 2014. https://www.strategyand.pwc.com/media/file/Strategyand_In-the-Fast-Lane.pdf.

* All sources for charts and graphs are listed within the whitepaper.