The electronic T&M industry is on the up curve, with growth fueled by opportunities across industries including communications, semiconductors, automotive, computing, consumer electronics, industrial, energy and medical devices among others. Comprising more than 150 companies, the global electronic test equipment market generated $10.83 billion in 2017. It is expected to witness a compound annual growth rate (CAGR) of 4% from 2017 to 2022, although the growth rate will vary greatly by segment—semiconductor automatic test equipment (ATE), radio frequency (RF) test, digital test, electrical and environmental test, and data acquisition (DAQ).

There is growing demand for test and measurement equipment from the automotive industry to address trends related to the  connected car and autonomous driving.

Infotainment systems have evolved tremendously and are now at the core of the value proposition being offered by auto makers. The adoption of wireless communications standards like long term evolution (LTE) and Wi-Fi are highlighting the need for more RF testing. In addition, significant R&D investments are being made in automotive radar and target simulation.

In addition to traditional automotive customers, market participants are experiencing demand from non-traditional customers focused on automotive applications as they work on technologies related to driverless vehicles, collision avoidance, and the new Wi-Fi standard 802.11p.

In the R&D phase, most participants currently use instrumentation from T&M leaders. Automotive radar testing is, however, expected to move into the manufacturing phase and generate considerable opportunities for smaller participants over the forecast period.

Automotive customers face more measurements and more types of measurements as they integrate connectivity into cellular networks, infrastructure, and other vehicles while maintaining the same number of sensors for mechanical and electromechanical tests.

Customers are also pressed for time and need to prototype faster than ever before to beat their competition. They want to measure more signals at the same time, which increases the number of measurement channels in DAQ systems.

They are also looking to capture and analyze as much data as possible to maximize their product designs: data analytics is a key driver in the growth of data acquisition and analysis. The software DAQ segment is expected to grow significantly as a result.

The demand for greater bandwidth continues to increase, resulting in the need for higher transmission rates in data centers. 100G and 400G applications are, in turn, driving growth in the electronic test and measurement market by creating demand for higher speed instruments.

Extensive ongoing research on 5G technologies is boosting demand for electronic T&M equipment and will continue to do so over the forecast period. Currently, participants are trying to build intellectual property (IP) that will be part of the standard.

Due to stiff competition, there is intensifying pressure to reduce development times, driving engineers to leverage modular instrumentation to avoid developing hardware.

Growth will come from both low and high frequencies, as many 5G implementations are at high frequencies while other technologies sitting on the road to 5G such as LTE Advanced Pro, sometimes referred to as 4.5G, operates in the 3 to 6 GHz frequency spectrum, and the next release of 3GPP is touted to be 4.9G. The greater bandwidth requirements stemming from these technologies are expected to generate new equipment purchases.

With tighter margins for designs, there is a trend towards higher resolution in oscilloscopes, for example. While 8-bit oscilloscopes currently dominate the market, there is a significant shift occurring towards oscilloscopes featuring analog-to-digital converters (ADC) with a higher number of bits.

In addition, as mentioned earlier, the number of data centers is growing and they are highly sensitive to voltage and current fluctuations; data centers are huge consumers of grid energy and sensitive to power consumption and generation issues driving demand for electronic test equipment.

The continuous evolution of communications standards boosts demand for test equipment as customers have to test those new technologies in addition to legacy ones. More standards also increase the number of test cases and add to the difficulty in performing the measurements.

Measurements for 802.11ax, for example, are much more difficult to perform than those for 802.11ac. 802.11ax is thus currently providing growth for T&M vendors due to specific features requiring high RF performance and greater measurement accuracy.

As Wi-Fi technology operates in the unlicensed spectrum, industry participants have moved forward ahead of the standard’s official completion date. Chipset vendors, in particular, have been marching at full speed. The impact of this driver is expected to be strong in the short term due to the production ramp up, and reduce over the medium and long term of the forecast period. 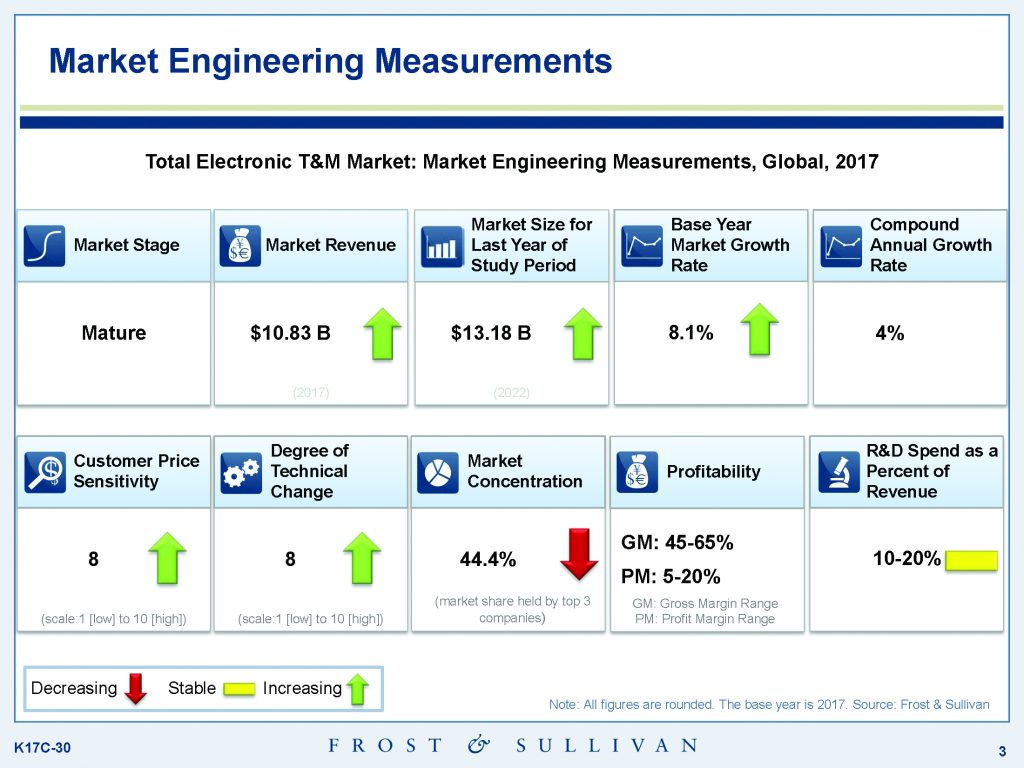 The A&D industry is an important end-user segment in the electronic T&M market that is typically a solid performer for vendors.

Although this end-user segment experienced a decline in 2017 in the U.S., it is expected to recover over the forecast period. Defense spending in the U.S. is growing again, after multiple years of decline. Defense budgets and future growth are driven by the Trump government’s increased focus on strengthening the U.S. military.

Research also indicates growing opportunities for T&M vendors from A&D in Asia Pacific. In India, the government had allocated $56 billion for the development of the Indian armed forces for 2017-18 and announced a further increase of the defense budget to around $63 billion for 2018-2019.

Aerospace electronics and avionics continue to advance, driving demand for advanced test solutions. With the increase in complexity of aerospace and defense systems, customers face challenges in testing, validation, and verification. This trend is accelerating the need for flexible and scalable test solutions.

A&D companies are also putting greater emphasis on test. Accurate and effective testing is required in every part of the end-to-end A&D supply chain. The pace of technology change, increasing system complexity, and changing standards and regulations drive demand for new test equipment.

Increasing aircraft production and model variations also drive demand for DAQ systems. Customers are also looking to capture and analyze as much data as possible to maximize their product designs.

Narrowband IoT (NB-IOT) and mobile IoT standards such as Bluetooth® Low Energy (BLE) and LTE-M are creating a new part of the market that did not exist earlier. Spending hundreds of thousands of dollars on a tester is no longer feasible. Demand for parallel testing and low-cost instrumentation based on USB is thus increasing.

USB instrumentation is now available from a range of vendors. Initially strong in power meters, they have expanded beyond this product segment into core instruments. New USB instruments have also improved in quality, which is helping them make inroads into the electronic T&M market.

As IoT devices move from R&D to manufacturing, demand for DAQ in manufacturing is also expected to increase. Although DAQ applications are used heavily in R&D, such equipment is likely to play a major role in automated testing, especially for IoT devices that require high measurement accuracy.

IoT is also generating a growing need for inspecting, testing, and verifying smart products and other equipment to ensure that they work correctly once deployed. This is driving the need for more field DAQ systems. This data can also be used to fine-tune designs in laboratories. With IoT, DAQ has the potential to be put on a large quantity of devices to generate data on how it is used. This data would be sent to a server and data analytics application and could be used by an engineer working on the design of the next generation of that product.

There is growing demand for RF test equipment from the medical devices industry. Medical device industry participants are building high-end RF chambers and expected to generate significant demand for electronic instrumentation over the next five years.

This industry presents opportunities also because there is less standardization compared to traditional end-user segments for electronic test equipment like communications and A&D. Participants expect considerable activity in R&D to promote the use of RF technologies in medical devices in the future.

Digital transformation is fueling a renewing of the installed base for digital multimeters, electrical testers, and environmental testers. Continued interest in increasing personnel safety and productivity is driving demand for connected devices and more capable instruments such as those featuring intermodal capabilities.

Customers in R&D and manufacturing applications are also starving for more intelligent instruments that can help accelerate development time, shorten time to market (TTM), and yield substantial product quality improvements. They are looking for effective solutions to leverage the wealth of test data generated by instruments, better manage their instruments, and facilitate collaboration between engineers and teams.

The ability to reduce hardware costs is leading to growing demand for software-defined instruments in the electronic T&M market.

A growing number of customers are not only looking to leverage open modular standard PCI eXtension for Instrumentation (PXI) but also maximize the number of applications they can support on the same PXI infrastructure.

In addition, the greater performance of modular instruments compared to previous versions is helping to boost demand as they can be leveraged by various companies to bring innovative solutions to the market and stimulate demand.

However, the impact of this driver on market growth is reduced at the overall level as they mostly replace traditional instruments.

The electronic T&M market is growing well. Frost & Sullivan research indicates significant growth opportunities in reach of market participants, the largest ones centering around 5G, autonomous driving, data centers, high-speed digital standards, and power applications. The companies most likely to succeed in capturing these opportunities are those who have been involved in research activities for 5G working with lead users; understand the different needs of automotive challengers while satisfying that of legacy automotive customers; are pushing the envelope in noise performance, precision and functionality for power applications; keep up with standards evolution through active participation in various organizations; and have developed a comprehensive offering for data centers.

Frost & Sullivan’s recent analysis, Electronic Test and Measurement Market, Forecast to 2022, provides a detailed assessment of growth opportunities and trends, including the key challenges test vendors face in today’s market, which product and end-user segments represent the most potential, as well as regional revenue forecasts and market shares. For further information on this analysis, please visit: www.frost.com/k17c