A major development effort in the design of the Mobile User Objective System (MUOS) is the waveform used in software defined radios (SDR) to provide terminal and manpack UHF communication radios.  Due to the complexity of using Spectrally Adaptive Wideband Code Division Multiple Access (SA-WCDMA) in the MUOS environment, Satellite Link Emulator test systems were required to aid in the MUOS waveform development effort.  This article will give an overview of the architectural implementation of MUOS, its current status and an update of the associated satellite RF link emulator test equipment.

While the U.S. Air Force oversees most DoD space based systems, the U.S. Navy is responsible for all narrowband UHF (240 – 400 MHz) satellite communications. The UHF spectrum is the only radio frequency that can penetrate inclement weather, jungle foliage and urban terrain and therefore has immense importance for DoD communications. The Navy has relied on UHF communications since the launch of the fleet satellite communications satellites in 1978. This was replaced by the UHF follow-on satellites and these, in turn, are being replaced by the Mobile User Objective System (MUOS). MUOS is the DoD’s next-generation narrowband satellite communications system that uses SA-WCDMA technology similar to commercial 3G to increase access to data and voice communication while in the battlefield. The MUOS system provides smartphone-like capabilities to support users who require mobility, high data rates and improved operational availability and is expected to provide ten times the system capacity of the existing UHF constellation.

MUOS consists of a constellation of four geosynchronous satellites (plus one on-orbit spare) and the associated ground station segment connected over fiber optic cable between multiple continents to provide transport and network management, satellite control and associated infrastructure to both fly the satellites and manage user communications. MUOS provides global connectivity between MUOS users and access to the Defense Information Systems Agency’s (DISA) terrestrial voice and Internet Protocol (IP) networks. MUOS will provide connectivity to the DoD Information Network via a Teleport interface for access to Defense Information Systems Network (DISN), services (SIPRNET, NIPRNET) and Defense Switched Network (DSN). MUOS also provides legacy UHF SATCOM capability with bent-pipe communications mimicking the UHF follow-on satellites. The MUOS satellites are more robust and have more individual carriers, which allow the signals to be focused on a smaller geographic footprint. This enables on-the-move access while improving reliability in vegetation, jungle and urban environments and other extreme conditions where legacy SATCOM was challenged.

The MUOS configuration consists of four satellites in geosynchronous orbit and four radio access facilities (RAF) as shown in Figure 1. Each satellite is always in view of two RAFs and each RAF is always in view of two satellites. The MUOS terminals communicate with a satellite via UHF uplinks and downlinks. Each satellite has two payloads (legacy and WCDMA). The WCDMA has 10x the capacity of the legacy payload (UHF follow-on). The satellite receives each UHF uplink, converts to a digital format and transmits the digitized signals to the RAF via a Ka-band downlink. This link is called User-to-Base (U2B). If comparing to 3G terrestrial terminology, each MUOS satellite corresponds to a “cell tower” and each RAF to a “base station.” The RAFs decode the user traffic they receive from the satellites. All RAFs are connected via high-capacity fiber optic terrestrial links (shown in orange in Figure 1). These terrestrial networks allow RAFs to send data to the nearest switching facility (SF). The SF then routes the traffic to the DoD Information network or another RAF that is in view of the MUOS satellite that has the destination user within the satellite UHF footprint.  Each RAF takes the traffic it receives from the two switching facilities (Wahiawa, HI and Northwest VA) and uplinks approximately half of the data to each of the MUOS satellites in its view via Ka-band link. Each satellite takes the data it receives and retransmits it on the UHF-band downlink to the MUOS terminals. The Base-to-User (B2U) link comprises the Ka-band uplink, MUOS satellite and UHF downlink.

Each MUOS satellite has a multibeam antenna for both transmission and reception of the MUOS UHF channels. The legacy UHF channel is transmitted on a separate transmit antenna (but received using the multibeam antenna). The multibeam antenna forms 16 beams that cover the entire footprint of the satellite. Each beam is further divided into four 5 MHz WCDMA channels (64 WCDMA channels per satellite). Each user within a channel is assigned a different spreading code, allowing up to 500 users to share the same single channel. On the U2B path, 32 channels are sent to each of two RAFs in view using the Ka-band downlink. On the B2U path, each RAF sends 32 channels via the Ka-band uplink to each of the MUOS satellites in view. The satellite switches each of the 64 channels it receives to the correct beam and channel. Each of the 64 channels per satellite is referred to as a Satellite Beam Carrier (SBC). The ground facilities attempt to spread the traffic load as uniformly as possible among all available SBCs to maximize system capacity.

All five MUOS satellites (four in use and one on-orbit spare) have been launched and are operational. They occupy a geosynchronous orbit and have a 5º orbital inclination. The four ground stations (RAFs) located in Australia, Italy, Virginia and Hawaii have completed construction and are also fully operational. A number of vendors offer MUOS compliant terminals.

With the legacy UHF follow-on satellite, both sender and receiver must be in the same satellite footprint. However, MUOS (which provide an on-demand, IP based ad hoc network coverage), offers worldwide coverage for any sender and receiver without the requirement to share the same satellite footprint. The MUOS design requirement was to provide global communication reach from latitude 65º N to latitude 65º S. Over 70% of the global required coverage is also covered by two satellites. This provides redundancy and protection if one satellite is jammed or disabled. Most geosynchronous satellites can’t reach users in the high latitudes (Artic), however recent tests performed by Lockheed Martin have shown that MUOS can cover much more of the Arctic than it was originally designed for. Actual reach has been as much as 89.5º N.

The MUOS occupied UHF band is heavily congested with other signals (TV, radar, navigation, etc.) and also the legacy UHF follow-on satellite signals and therefore, a signal modulation technique is required that can co-exist with many other signals. Spread spectrum WCDMA is ideally suited for this task. In addition to using spread spectrum techniques, error correction coding with turbo decoding and rake receivers are used to mitigate multipath fading.  In addition, adaptive signal processing and filtering are used to remove external interferers in the B2U and U2B signal paths. The MUOS terminals are also required to “notch” out portions of the MUOS waveform in order to comply with host nation spectrum agreements and to avoid causing interference with nearby signals. Similar to 3G terrestrial communications techniques, MUOS uses two types of power control loops to assure system performance. An inner loop tracks gain variations to achieve a target Eb/No and an outer loop monitors communications performance and makes adjustments to the target Eb/No. However, due to the extremely large round trip delays over satellite, the inner loop uses linear prediction to predict fade conditions based on past and current fading encountered. The outer loop estimates the instantaneous block error rate by applying a polynomial fit to the signal-to-interference measurement made in each frame. Secure Communications Interoperability Protocol (SCIP) is used for all communications between the MUOS user and DoD’s voice network.

General Dynamics Mission Systems released the updated MUOS WFv3.1.5 waveform at the end of 2017 and has now completed testing of this waveform on the U.S. Navy’s software defined Digital Modular Radio (DMR). In addition to DMR, the terminals shown in Table 1 support the MUOS waveform.

Development of the MUOS waveform started well before the MUOS satellites and RAF’s were available. A test setup was required to emulate the physical layer RF link impairments between a transmitter and receiver to allow testing/investigation of the various communication models and coding techniques. dBmCorp, Inc., has developed a signal agnostic satellite link emulator to add signal impairments and allow the execution of tests in a repeatable and well defined environment. The channel emulator permits the following impairments to be added to any signal:

Sophisticated modeling and control software are provided with the channel emulator as an optional accessory to permit realistic scenarios to be easily created. The SATGEN-RTE (real time emulation) software allows users to generate test setups in which satellite orbit profiles, ground station locations, uplink and downlink frequencies and atmospheric modeling/losses are easily defined by users. The software will automatically generate the impairment parameters and upload to the emulator for test development execution. In addition to SATGEN-RTE, the link emulator product line supports the Satellite Tool Kit (STK®) package from Analytical Graphics.

In excess of 30 test systems have been delivered to two prime contractors and the U.S. Navy for aid in development of the MUOS waveform and terminal and interoperability testing. There has been continuous improvement and feature enhancements to the satellite link emulator product line and the latest iteration is designated the Advanced Channel Emulator (ACE). This emulator not only permits RF link impairments with the ability to handle very large bandwidths up to 600MHz (note: MUOS is narrow band of only 20MHz), but also provides the tools to allow hardware-in-the-loop modeling to help determine the effect of inadvertent hardware induced impairments on the communications channel. The ACE allows the following “payload” induced impairments to be inserted/modeled:

The graphical user interface provided with the ACE permits hardware-in-the-loop impairments to be easily specified/generated. Figure 6 shows an example using one of the payload suite wizards to define a “notch” in the passband response, generate the necessary FIR coefficients and upload to the ACE.

dBmCorp, Inc., located in Oakland, NJ is a worldwide supplier of advanced channel emulator test systems for the satellite and wireless markets. For more information contact dBm at (201) 677-0008 x 205 or e-mail info@dbmcorp.com, or visit www.dbmcorp.com 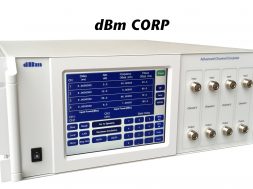