The company has joined the NVIDIA Partner Network as a Preferred Solutions Integration partner. Involvement in the program requires a strong product development effort and continued commitment to growing the general-purpose GPU (GPGPU) community. With innovations like the NVIDIA Xavier-based A178 Thunder AI System, the company has brought to market some of the most powerful, most compact GPGPU processing systems for the defense market. The A178 system features 512 CUDA cores, twice as many as Jetson TX2-based systems, as well as 64 of NVIDIA’s new Tensor Cores, which amplify the matrix processing of large data sets by enabling higher levels of computation with lower power consumption. The new AI system can handle up to 32 TOPS (trillion operations per second) to produce local processing of high volumes of data closest to system sensors. This represents a 10x increase over initial testing of prior generations of GPGPU-based systems. Weighing less than 5.5 pounds and measuring only 8.5 x 3.2 x 6.8”, the rugged A178 Thunder is SWaP-optimized and ideal for a number of military and defense applications. 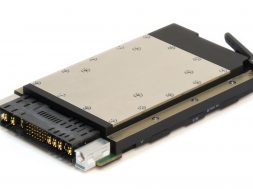