The ADAR1000 is a 4-channel, X- and Ku-band beamformer chip for phased arrays and satellite communications systems that covers 8 to 16 GHz. The device operates in half-duplex mode between receive and transmit modes. In receive mode, input signals pass through four receive channels and are combined in a common RF_IO pin, and in transmit mode, the RF_IO input signal is split and passes through the four transmit channels. In both modes, the ADAR1000 provides up to 21 dB of transmit gain with flatness of no more than +/-1.7 dB, and 360° phase adjustment in the RF path with 6-bit resolution. SPI controls all the on-chip registers, and two address pins allow SPI control of up to four devices on the same serial lines. Dedicated transmit and receive load pins also provide synchronization of all core chips in the same array, and a single pin controls fast switching between the transmit and receive modes. The ADAR1000 is available in a compact, 88-terminal, 7 mm × 7 mm, LGA package and is specified from −40°C to +85°C. 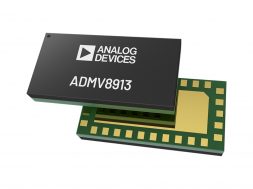