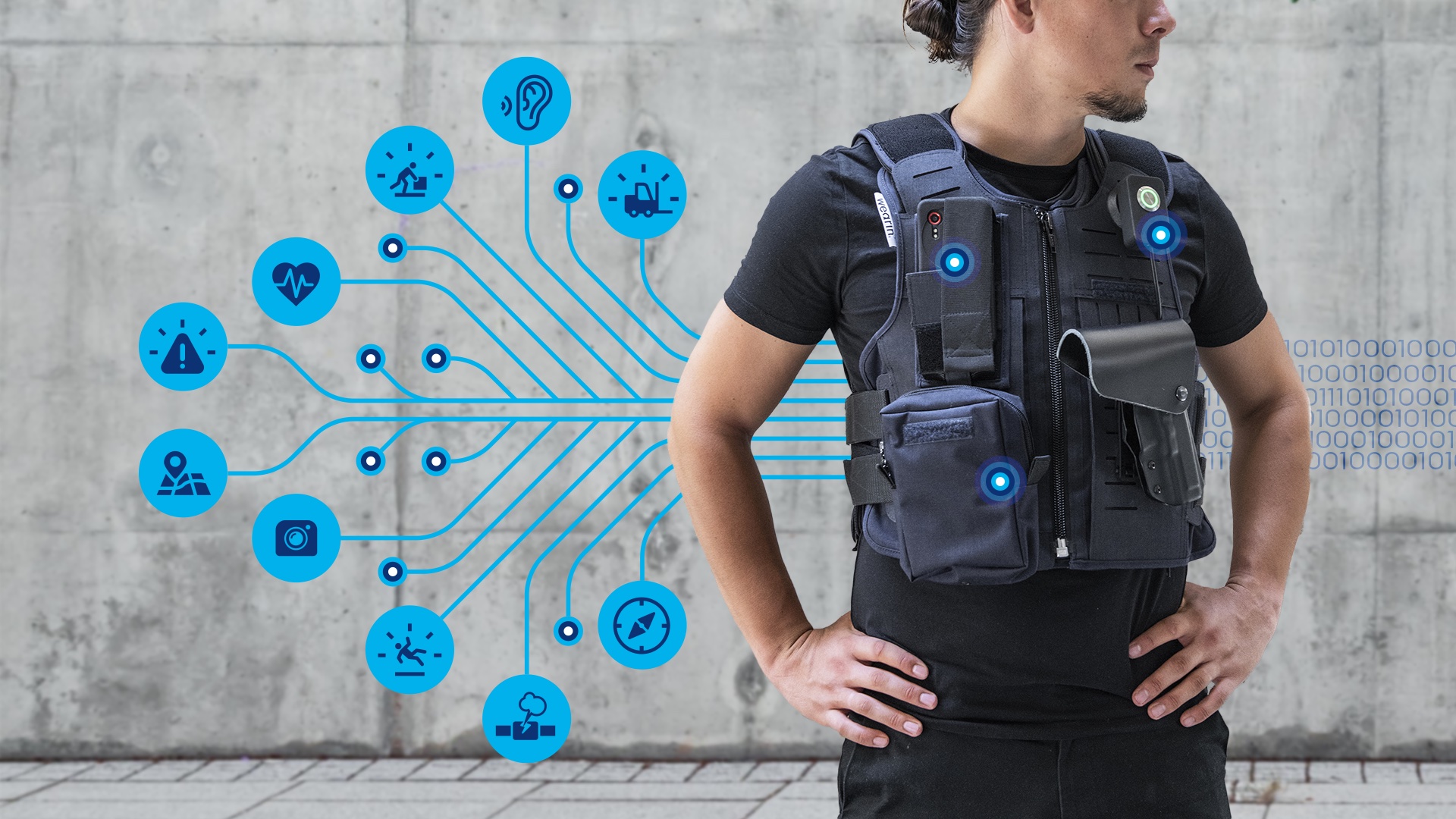 Since the beginning of October 2022, all the agents at the security company SOS Cash & Value have been equipped with the intelligent vest from Wearin’, the startup whose Internet of Things (IoT) technology is specifically designed to reinforce the safety and efficiency of its mission-critical teams on the ground.

The high-tech vest that SOS Cash & Value’s security guards wear at all times during their mission throughout Switzerland is equipped with environmental and biometric sensors connected to the monitoring center based at the security company’s headquarters in Vernayaz (Valais). The Wearin’ dashboard integrated into the center’s warning system provides real-time information on the situation on the ground. It continuously displays the data from the sensors whose algorithms correlate biometry, movement, acceleration and positioning in the vicinity and in the armored vehicle, which is also equipped with a specific sensor. An alarm is automatically triggered when the system detects an abnormal situation such as a security guard falling over (Man Down detection), or the stress caused by an incident such as an attack on a vehicle. The alert and communication system between the agents and the monitoring center enables the SOS Cash & Value mission leaders to decide on the actions and measures to secure and intervene with the emergency services and police forces at the scene of the incident.

“This personal equipment is revolutionizing the world of private security”, explains Pierre-Yves Glassey, CEO of SOS Cash & Value. “It’s cutting-edge and provides an ingenious and reliable solution, tailored by Wearin’ to our company’s specific needs, and based on our experience and standards in security. This high-tech bulletproof vest provides a security guard with exceptional safety.”

The technology developed by Wearin’s R&D engineers in Morges (Vaud) was successfully tested on a European scale in May 2022, during first-aid drills in the event of a major disaster. It is intended for organizations whose staff is called upon to coordinate risky activities and interventions on the ground, such as police forces, firefighters and first responders, or lone workers in the logistics or construction sectors.

“Our IoT technology is unique on account of its ingenuity as well as its integrability and modularity,” specifies Alvaro Goncalves, Wearin’s Technical Director. “We implement it as a turnkey end-to-end solution, on two platforms that communicate permanently with each other: on the one hand, the physical platform of the smart vest worn in the field by the customer’s staff and, on the other hand, the digital platform that is easily integrated into the customer’s monitoring system. The digital platform collects and centralizes the data transmitted by the vests’ sensors. These data are processed by artificial intelligence and then displayed via an application on a security dashboard used by the operators in the engagement and monitoring centers. Both platforms are modular and scalable. Our solution is designed to be adapted very easily and quickly to the customer’s own needs and technological capabilities.”

The SOS Cash & Value Security Manager notes the data security guaranteed by the solution: “This is a crucial point for the SOS Surveillance Group, to which SOS Cash & Value belongs. Our group wants to take the lead in reinforcing our agents’ security, which is the priority. Since the encryption used by Wearin’ to encode our data is of the highest industrial standard, we are protected against any criminal intent to decrypt them.”

Jonathan Brossard, CEO of Conextivity Group to which Wearin’ belongs, is pleased to implement the solution as a world first with a Swiss customer: “Three years almost to the day after the creation of our startup, and following strategic partnerships concluded early this year with leading suppliers such as Airbus with its Secure Land Communications (SLC) division, the race was on to implement the solution on the ground. We’re pleased that it’s in Switzerland, the country where our solution was designed, that Wearin’ is applying its unique IoT and artificial intelligence technology at the service of the connected human.”

About Wearin’ – www.wearin.tech
Founded in 2019 by the Fischer family of the Conextivity Group, Wearin’ creates wearable IoT solutions that enhance safety and efficiency by improving situational awareness and enabling better coordination of connected humans such as lone workers, firefighters and first responders. Its solutions designed in its R&D center in Morges, Switzerland (Vaud) make high-risk work environments safer and smarter with real-time insights from user-generated field data.
Wearin’ is part of the Conextivity Group, a global technology leader in high-performance connectivity solutions that manage power and data flows seamlessly from sensors and devices to the cloud and AI, enabling the emergence of new transverse and scalable ecosystems. With more than 600 people worldwide, four R&D centers and six manufacturing sites, the group, which is headquartered in Saint-Prex (Vaud), Switzerland, comprises two core businesses: Fischer Connectors and Wearin’.

About SOS Cash & Value – www.sos-cashvalue.ch
The SOS Surveillance Group in Vernayaz (Valais canton, Switzerland) and the Securitas Group in Zollikofen (Bern canton) have joined forces to collaborate in the fields of cash handling and cash management. To this end, the two groups have formed a joint venture, SOS Cash & Value, to which the SOS Surveillance Group and the Securitas Group contribute their cash handling and cash management activities. The SOS Surveillance Group has a majority stake in this joint venture. This initiative follows recent developments in the cash-handling market. SOS Cash & Value is now offering its services expanding throughout Switzerland. With its center in Vernayaz and its highly secure facilities, the SOS Surveillance Group has an ultra-modern infrastructure for cash management and offers its services in the transportation of valuables throughout Switzerland. The Securitas Group, which was historically the first company in Switzerland to enter the cash-transportation business with Securitas Express in the 1960s, enables this joint venture to benefit from all its technical know-how relating to cash management. It thus represents an opportunity for customers to have a reliable alternative that is entirely in Swiss hands.